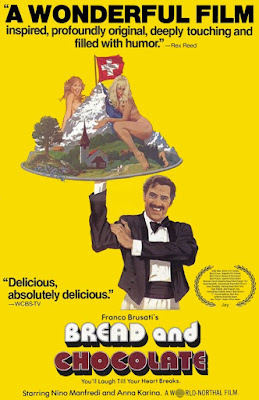 Bread and Chocolate (Pane e cioccolata) is a delightful comedy by Franco Brusati. The film is rooted in a social commentary and as implied by the title, the juxtaposition of Italian and Swiss cultures. The social commentary of Bread and Chocolate remains relevant in the modern era throughout the world. The film uses humor to address prejudice, problems within the Catholic Church, and the universal theme of a man trying to carve out his place in the world.

At the heart of Bread and Chocolate is the character Nino Garofoli played by Nino Manfredi. Nino is an Italian immigrant living in Switzerland trying to build a better life. Although the audience is continually laughing at the trials and tribulations of Nino, Nino continually faces an underlying tragedy.  Despite Nino’s efforts to fit in and obtain the acceptance of the Swiss people, he must embrace the notion that some goals are never accomplished. 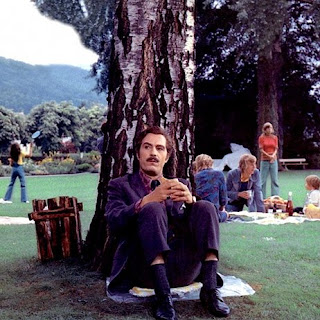 Nino moved to Switzerland, because he was not able to make a living wage in Italy. At the beginning of the film, Nino is optimistic and relishes in the Swiss culture, but the audience soon learns that Nino’s unrefined and Italian ways clash with the sensibilities of the Swiss. Nino chain-smokes where smoking is prohibited. He litters next to garbage cans, and he urinates in public. Even Nino’s eating disrupts the peaceful music of the Swiss people. Nino eats a chocolate sandwich during the opening, and the musicians playing music in the park stop while Nino chews. They are appalled that he would chew bread in the park. Nino is allowed to work in Switzerland, but he is not welcomed by the Swiss with open arms. Instead, the Swiss often treat Nino like an uncultured and unwanted buffoon. Despite the conflict of cultures, Nino remains proud to work and live in Switzerland.
On the surface, Switzerland appears to be a place where nothing can go wrong. It seems as though everyone is highly sophisticated and morally superior. During the opening of the film, the Swiss ride horses, listen to violins in the park, and everything they do seems picturesque. At one point, a dog runs with two children elegantly carrying a basket of flowers in its mouth. The image arouses the notion that even the Swiss dogs are more sophisticated than Nino, the stereotypical Italian (Candela). However, Nino quickly learns that Switzerland is not perfect, and many of the Swiss people are highly flawed. Although Nino attempts to have a relaxing day in the park, the discovery of a young girl’s dead body quickly interrupts Nino’s respite. A priest quietly stands behind a tree as Nino attempts to make sense of the situation. Although the Swiss police arrest Nino for the murder of the girl, the priest eventually confesses to the murder, and the police set Nino free. The crimes perpetrated against children by priests are certainly not unique to Switzerland, and the audience gets the impression that internal problems within the Catholic Church transcend borders and denominations.
Meanwhile, prejudice against Italians in Switzerland is also a prominent theme of the film. Nino’s friend arrives to work late, because he was in a fight with Swiss people that were talking poorly about Italians. 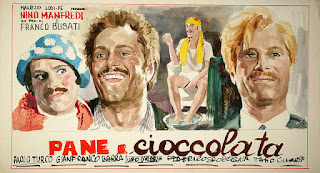 Although the Swiss find Nino and Italians in general to be crude and unrefined, Nino believes that the Swiss people treat him better than the northerners of Italy treated him. Additionally, one evening when speaking to a photo of his family, Nino proclaims that he could never make the type of money that he makes in Switzerland if he was still living in Italy. Nonetheless, despite many attempts, Nino never ceases being an Italian. In the beginning, Nino is a child trapped in a man’s body, but his failed attempts to relate with children on numerous occasions foreshadow the notion that Nino will eventually lose his innocence and have to grow up. In fact, Brusati signals Nino’s maturation throughout the film, as he grows more and more tired of the delusional optimism of signing Italians.
After the police release Nino, he wanders the streets of Switzerland. While absorbed in thought, Nino urinates on a wall in front of two Swiss people taking pictures. The two Swiss people report the incident, and Nino ends up losing his work permit. Nino gets on a train back to Italy, but he quickly decides that he will not go back to Italy. He goes to his former neighbor Elena for a place to stay. She is not fond of the idea, because she is already hiding her son Grigory from the Swiss authorities. Elena and Grigory are political refugees. Eventually, Elena allows Nino to stay at her home for a short period. Although Nino does not have a work permit, he attempts to work for an Italian industrialist and at a chicken farm. However, both jobs end in tragedy and folly. The Italian industrialist commits suicide and loses Nino’s money. Shortly after, Nino gets an unsanctioned job and place to live at a chicken farm. However, Nino realizes that life on a chicken farm is exactly the type of life that caused Nino to leave Italy. Instead of incessantly signing Italians, on the chicken farm Nino must endure his companions clucking and acting like chickens. Much like Nino, the chicken farmers are too naïve and “chicken” to face the reality of their situation. They stare at the Swiss people with admiration as though the Swiss are gods and goddesses, but they are not. They are simply people with different colored hair. 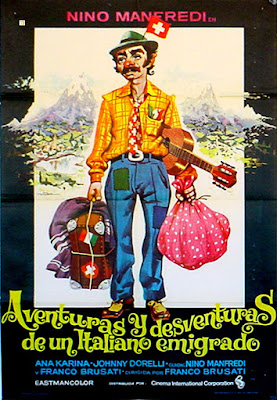 Eventually, Nino dyes his hair blonde in order to pass as a Swiss native. He looks somewhat ridiculous, but others treat him with more respect. At first, it seems as though Nino is happy to pretend as though he is from Switzerland. Nonetheless, his blonde façade merely mirrors the discontent that he and other Italians mask with humor and signing. During a televised soccer match at a pub, Nino attempts to blend in and roots against the Italian team. Meanwhile, Nino realizes that he cannot be an accomplice to the cruelty and prejudice toward Italians, and he begins cheering for the Italian team proclaiming, “sono italiano” (“I am Italian”) to all the patrons of the pub. He stares at himself in a mirror that hangs in the pub. Although Nino thought that dying his hair would be the answer to his problems, he despises his ridiculous and fake hair. He cannot stand to look at his own reflection, and he smashes his head into the mirror shattering the image he has of himself and the Swiss people. The patrons of the pub throw Nino out of the pub onto the street, and shortly after the Swiss authorities force Nino to leave Switzerland.
Nino embraces Italian stereotypes as he walks with a Swiss escort to a train back to Italy. He knows that resisting the Swiss’ prejudice toward Italians is futile. He tears posters off the train station walls, blaming his Italian nature. He slaps an older woman on the rear end, and he blames his hand. Before boarding the train, Nino attempts to urinate in the open again, and his Swiss escort merely tells him to stop, dismissing the action as something Italians must do all the time. Once Nino boards the train, a loudspeaker begins calling his name, and Elena walks by the train. Nino is surprised and excited to see Elena, and he rushes back off the train to talk to her. This short exchange between Nino and Elena captures the spirit and tone of the entire film. Nino’s hair is an overtly noted symbol of both Nino’s character and the thematic devices used throughout the film. When Elena comments on Nino’s half-blonde, half-brunette hair, Nino explains that his hair inadvertently reflects who he is, “That’s me, neither here nor there.” However, Elena does not believe him, and she refuses to sympathize with Nino’s tragedy. Instead, she tells Nino that the problem is not Italy or Switzerland, but rather that Nino must eventually choose to live and embrace life. Elena informs Nino that she was able to get his work permit reinstated, but Nino refuses the offer.
Regardless of Elena’s attempts to cheer Nino up and persuade him to stay, Nino decides to remain on the train back to Italy. As the train departs for Italy, the other Italians on the train begin singing about the sun and the sea. Nino knows that he needs more from life than just the sun and the sea. 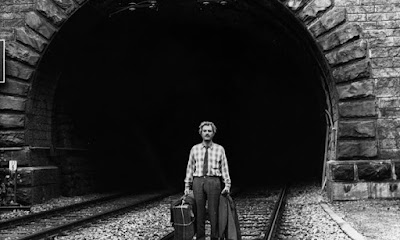 As the other Italians sign and play the accordion, the train enters a tunnel into a black hole of frivolous indifference and delusional happiness. Nino pulls the emergency brake, gets off the train, and walks out of the tunnel back onto the Swiss landscape. In this moment, Nino demonstrates a sense of strength and determination. He ran away from his problems from Italy. Instead of running back to Italy from the problems he faced in Switzerland, Nino decides to face his troubles. He accepts that which he cannot change. Nino takes Elena’s advice, and he chooses to live.
Bread and Chocolate is not only a wonderful comedy and social commentary, but also an exquisite example of filmmaking. Brusati’s directing, the use of music, the performances, and the dynamic themes of the film overshadow any minor imperfections, such as the camera going out of focus. Regardless of any imperfections and flaws, the audience cannot help but love the character of Nino, and he is truly an understated hero. The German part of Switzerland depicted in the film was one of the most racist parts of Europe during the time (Candela). However, in the end, Nino transcends the Swiss’ racism. He refuses to let prejudice and rejection dominate his life, and he continues to fight for his pursuit of a better life.

Posted by Burning Empire Media at 4:30 AM