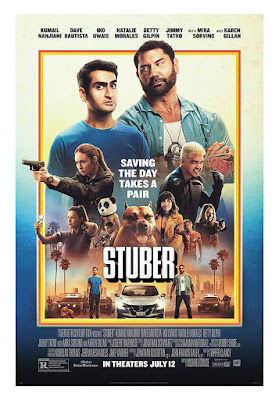 Stuber is a fun comedy. Perhaps, they could have done less as the plot does meander around the bottom half of the second act. Each member of the cast is always hilarious throughout the movie, but the ending also lingers until it falls flat and fades away.

Nonetheless, it is a popcorn flick to kick back and laugh at for an evening. Meanwhile, the action and gunshot wounds were freaking awesome. While the movie was bound to have weak areas, in general, it provide an intense action rampage with plenty of laughs. I have a penchant for the emotional juxtapostion of laughing while watching heads explode.

Critics note: I happen to see that Stuber possesses a 40-something% aggregate on Rotten Tomatoes. It a buddy action comedy about a cop and an Uber driver named Stu. What on Earth are peole thinking when they start watching a movie like this? 40% indicates that the majority of critics were disappointed in this film. I'd say if you're going to see a movie called Stuber, you should lower your expectations.
Posted by Burning Empire Media at 11:55 PM