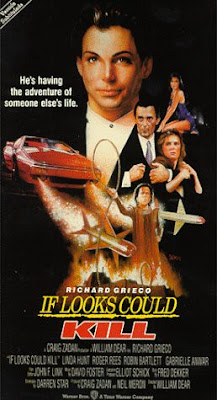 Released in 1991, directed by William Dear, and capturing a breathtaking 29% on Rotten Tomatoes, If Looks Could Kill provides a perfect encapsulation of the true nature of the 90s. While the 90s were generally a crock of shit, this film is fantastic from the beginning to the end.

Michael Corben is my hero, and all of the bad guys are pseudo-fascist dirtbags that I hope die. From Jump Street, I want Michael Corben to kill everyone and win.

I used to play If Looks Could Kill as a child. I would run around my grandmother's backyard shooting people in the face and making out with hot chicks. It was a blast.

Grandma would scream racial slurs at my grandfather for watching basketball. This was a special type of racism that tormented my grandfather their entire marriage. 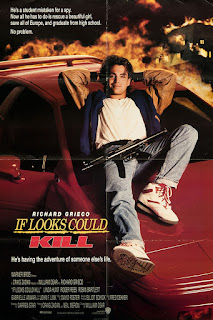 Unfortunately, there's not much diversity in If Looks Could Kill, just a lot of white people shooting at the wrong white guy. I feel as though I am still playing Michael Corben in life, but how can anyone ever be as cool as Grieco? I imagine this is a question that only Grieco can answer.

There should be a sequel to If Looks Could Kill, out of nowhere, with no one asking for it, reboot the fucker. Up Till Dawn will take the property, put it through a lens of gruesome hyper-violence, it will be delightful.

Last line of the movie, context irrelevant, "Turns out, looks can kill."