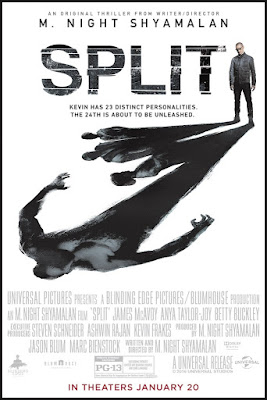 Split is a cool movie, and it is definitely one of my favorite M. Knight Shyamalan films. I imagine that many people would agree that it is one of his best films. But like many things, Split is not necessarily for everyone.

For the most part, I like M. Knight's movies and all of their twisty twists. Split is a twisted movie that does not really have a twist while still managing to have a clever twist. And for that I love M. Knight.

Granted, plenty of folks will not share the sentiment as audience members of M. Knight's films often seem divided. Whatevs.

I also love M. Knight's The Happening. The trees killing everyone is a brilliant idea, and I am not afraid to defend the claim.

Honestly, I do not have too much to say about Split that is not simply a blatant give away of plot points and details about the story that are best discovered as meant within the film.

I am also watching M. Knight's The Visit in the background. The grandmother is crawling after a child creepily croaking, "I'm gonna get you." Scary stuff. I'm freaked out and obviously distracted.

Anyway, sorry, I like Split more than Shyamalan's acclaimed The Sixth Sense. I may even buy the Split combo pack when it is released. Additionally, James McAvoy's acting is incredible. Even if a viewer does not appreciate the film in general, McAvoy's performance alone is worth the price of admission.

(Since I brought it up and I'm watching it, The Visit is also a really cool Shyamalan flick. The problem is this little boy in the film. He is profoundly annoying.) 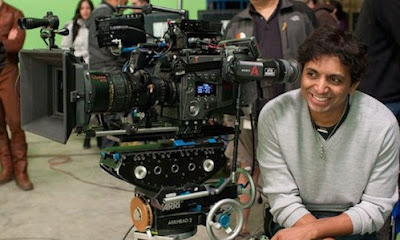 Oh, and while we are on the subject of M. Knight, stop calling Devil an M. Knight movie and tying it into conversations about "his" movies. He did the story and was a producer for the film, he neither directed the film nor wrote the screenplay. It's like when my friend calls Predators Robert Rodriguez's film, he was just a producer on that one. This shit drives me nuts. Nonetheless, I like both Devil and Predators. Fun flicks.
Posted by Burning Empire Media at 11:22 PM