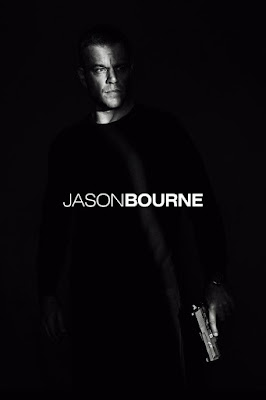 Wow, Jason Bourne is an incredible disappointment. I was excited and super pumped to see this movie. The trailer looked awesome, and I enjoy a lot of aspects of the previous Bournes. While I initially doubted the 58% critics' aggregate on Rotten Tomatoes, I now feel as though Jason Bourne is more deserving of the recent DC films' percentages.

I do not know what is up with this I've-never-shot-a-movie-before approach some directors are taking to films, but in general, I kinda hate it. And the director Paul Greengrass has not only directed many previous films, but also the last two Damon-led Bourne films. I spent a good portion of the last half of the movie trying to find a spot that some sort of stationary camera was utilized, but the task is seemingly impossible.

Prior to seeing the film, I said, "I bet it's going to have some of the best fight scenes of the summer." Wrong. I have no fucking clue what really happened in the fight scenes, because they were simply a blurry mess of cameras being tossed around. I'm all about moving the camera around but come on! Reign it in a little bit.

We're guided through the story via characters' text messages a couple times in the movie and quite a bit of frames are wasted moving that camera around trying to hone in on a guy as he walks and a cameraman walks handheld. Seriously?

Oh and, I'm pretty darn sure I fell asleep for a moment at the beginning of the big car chase. Honestly, I thought this was going to be one of my favorite movies of the summer, and I liked a bunch of movies this summer. However, Jason Bourne left me perpetually wondering, "So, when does this get awesome?!" It didn't really.

The story was decent, but I wasn't going to a Bourne movie solely for a good story.

This was supposed to be my last badass super-action film of the summer.


I honestly don't give a shit about Suicide Squad. I'll see it, maybe in theaters, maybe not, so the only remaining summer movie that I am looking forward to is War Dogs (August 19th). Otherwise, my summer movie season is over.

I am a fan of the Bourne Franchise. I'm not a super fan and I do not have desire to read the Robert Ludlum books, but when the first Bourne came out, it was groundbreaking fight scenes and a well-designed central character and story. My excitement before seeing Jason Bourne is simply an example of amazing trailer editing at work. As far as I am concerned, almost everything worth seeing is in the trailer. Except the ending, which is not bad. The movie as a whole was just, "Ehh..."