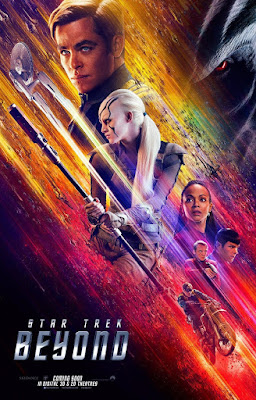 Before we begin singing the praises of this film, I should warn you that I've never been much of a fan of Star Trek in general. Growing up, I watched The Next Generation, and as far as Star Trek television series go, it's definitely my favorite.

I know, some would consider my statement blasphemous, but I'm not a rigid purist. Additionally, I've always been more of a Star Wars guy than a Trekkie. This film though, Star Trek: Beyond, this film right here...

It is on an entirely different level. I enjoyed the story, the new antagonist Krall, the action, the performances, the campy humor, and everything outside and in between. Furthermore, Beyond is beautifully shot and orchestrated masterfully throughout the entire film. 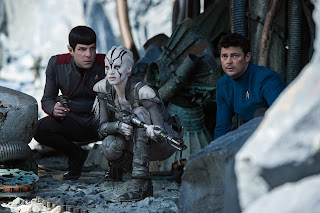 In addition to not being much of a Star Trek fan, I have never been much of a fan of director Justin Lin. As far as I was always concerned, he's just the guy that did some of those Fast and Furious movies. I'll pass.

Despite my previous impressions of Lin, his style and way of telling a story is perfect for this chapter, and further chapters, of Star Trek.

Lin's toughened-up approach to Star Trek blended harmoniously with the performances of this time-break cast led by Chris Pine, the incredible visual effects, and Simon Pegg and Doug Jung's script. Personally, Beyond is what I think Star Trek should be in the modern era.
Posted by Burning Empire Media at 1:30 AM