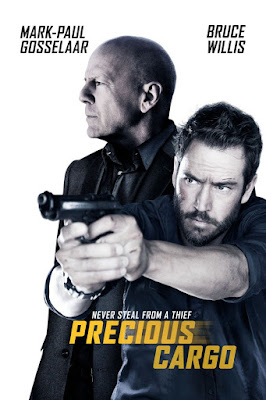 Precious Cargo is not a good movie. It is somewhat entertaining, and certainly worth watching if you're interested in a Mark-Paul Gosselaar v. Bruce Willis film. That's basically the only reason for watching the movie.

The script was generally okay, but also just down right terrible at times. Additionally, outside of the Willis and Mark-Paul, the casting was kinda shity, especially the casting of the female leads. I will not even comment on their performances. Jenna B. Kelley did well as Mark-Paul's sidekick, but the ladies just didn't feel right for the parts or alongside Mark-Paul. It's almost as though the casting department could not get the fact the Mark-Paul is no longer a teenager in high school out of their heads.

Nonetheless, the movie did not suck because of Mark-Paul. He was the best part. The movie just kinda sucked. The screenplay could have used a couple more polishes, especially in the character department, and the casting was awkward. However, the action was often incredible, and I continue to be an advocate for Mark-Paul having more roles (lifelong fan).

After The Sopranos ended, Mark-Paul and Luke Perry were in the time-slot replacement series John from Cincinnati. They were both great in the show and should team up again sometime soon. For the record too, the up-and-coming writer/director Max Adams is a good filmmaker. This film just fell a bit too short. I imagine he will make something really cool eventually.
Posted by Burning Empire Media at 2:30 PM