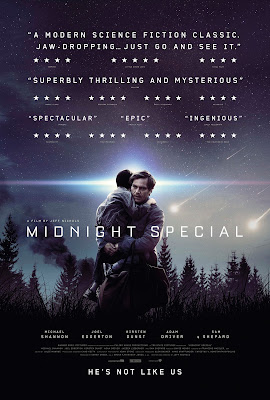 I'm a sucker for a good father-son movie, and Midnight Special was a refreshing departure from the traditional approach. Jeff Nichols is an auteur in the purest sense of the word.

I did not like Midnight Special as much as his film Mud. However, as far as I'm concerned Mud is one of the best films of the 2010s, so there is no need to hold it against him. Nichols has a unique and awe-inspiring style when it comes to science-fiction stories, depictions of violence, and filmmaking in general.

I enjoyed the story of story of Midnight Special, and the acting was incredible. Michael Shannon, Joel Edgerton, and Adam Driver provide the audience a powerhouse cast of sophisticated and entertaining acting.

Kirsten Dunst's performance was also well done. But she has a crying scene that fell utterly flat, and that is why she will remain Peter Parker's girlfriend and somewhat out of place in the cast as far as acting chops go. Either way, she held her weight and did not drag the movie down. 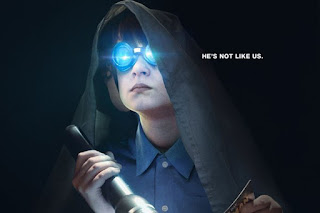 Midnight Special was not what I was expecting at all and that was expected, but it was also way better than I thought it was going to be. It is definitely a little slow at parts, but it was an entertaining and engaging story that did not try to situate itself in genre or expectations.

Look for Loving coming to theaters this November, also written and directed by Jeff Nichols.

Posted by Burning Empire Media at 1:13 AM