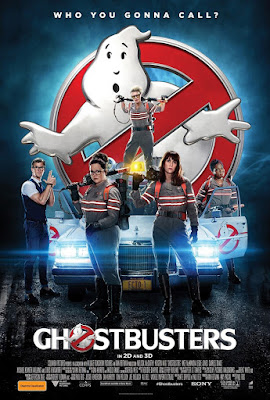 The box office numbers for Ghostbusters are really disappointing. I don't really like going to opening weekends regardless of the film, but if I knew that the opening weekend of a new Ghostbusters movie was going to be so depressing I would have ran to the ticket booth. And I'm definitely going simply to boycott all the douche bags that are pissed off that it is an all-woman cast.

Who cares? It looks cool, and all of the actresses are awesome. And I like Paul Feig movies. I don't know how big his part is, but as far as I'm concerned it doesn't even seem as though Chris Hemsworth needs to be on the poster. This has been a debate from the beginning, and that's where I stand on the issue. Who gives a shit? Annie Potts was not on the original Ghostbusters movie poster.

Listen, I know that nothing is going to compare to the original cast, so it seems to me, why bother trying to recreate it? And why not go in a totally different direction? It's simply a fun idea, and all the boys on the playground already have the first two movies and a bunch of other Ghostbusters content to swoon over. Meanwhile, who says they can't swoon over the new Ghostbusters, especially Leslie Jones. Fuck Milo Yiannopoulos! 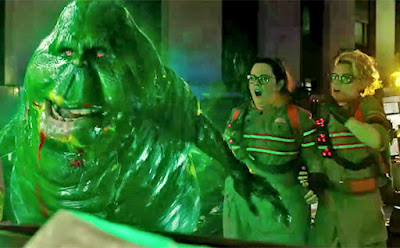 It's a summer action reboot. It's supposed to be fun. It's a wholesome American franchise and we just shit all over it because of nonsense. $46 million domestic on an opening weekend of a $144 million movie is never a good sign, and personally I think it's just sad.

It is undoubtedly going to be the next movie I see in theaters. Why not just enjoy it? I'm sure it's a fun movie if you can get beyond your penchant for male-dominated cinema. Meanwhile, don't worry, the dudes aren't going anywhere. I mean come on! Slimer looks awesome.Screw it, I'm going to see it today dammit!
Posted by Burning Empire Media at 1:30 AM