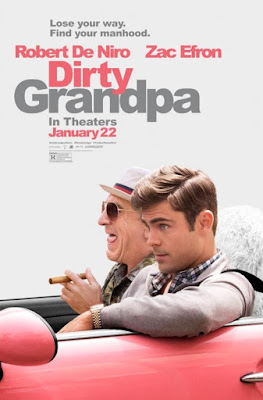 Dirty Grandpa is way better than the critics reported. I don't understand why this film did so poorly. I wanted to see this film in theaters. Instead, when it was out, I went to see Hail Caesar! I love the Coens, but a 85% for Hail Caesar compared to a 10% approval of critics for Dirty Grandpa is ridiculous (Rotten Tomatoes).

For me, this is exactly why you should not make your film selection based on the reviews. Yes, this is a review, but we think you should try to see every film possible, good or bad. Meanwhile, I would have preferred to wait for Hail Caesar! on video and seen Dirty Grandpa in theaters. Yeah, I said it.

Zac Efron is quickly becoming an fun addition to quality, adult-comedy films, and Robert De Niro is frickin' De Niro. Personally, I cold care less if he wants to make these types of comedies for the rest of his life.

No, self-respecting filmmaker does not love the early work of De Niro. However, he doesn't need to do those roles anymore if he doesn't want to, and who the fuck are you to comment on his performance. His performance is always beautiful. Pretentious bastards.

Zac Efron is supposed to be the guy that cool tough guys despise. His performance in this movie and movie like Neighbors makes it difficult to hate him. I also appreciate that he is more than willing to make fun of himself, and he has the surprising ability to bring out the multi-dimensional attributes of a scripted-comedy character.


Yeah, the movie is predictable as hell and you'll know how it's going to end within the first 15 minutes, but it certainly does not end in the way one would expect for grandpa. Either way, it's a raunchy comedy, not a dynamically arced art film, so who gives a shit?

I am confused by all the hate of this movie. If an individual goes to an R-rated film starring Zac Efron and Robert De Niro called Dirty Grandpa, they get exactly what they expect.