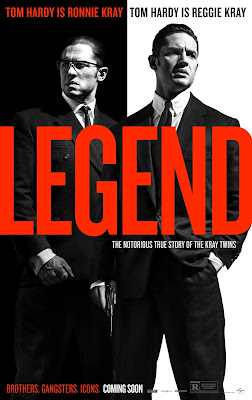 Tom Hardy never stops being incredible, that's all there is to it. This guy is utterly amazing. Meanwhile, Legend is about two British gangster twins (Ronnie and Reggie Kray,) so this mean that we get twice the Tom Hardy for our money.

I enjoyed the film, and the first half of the movies was highly entertaining. However, somewhere during the second half of the second act things started to slip. It felt as though the writer started out with a great story, but didn't really know how to end the thing.

Additionally, the color correction/D.I. was a little awkward and distracting. In some ways, it seemed bush league, but maybe that's just me. I am by no means a colorist, but I feel as though the color work done on Legend was a little too heavy handed.

Nonetheless, I still really enjoyed and recommend watching Legend right away, and I would definitely watch it again. Tom Hardy's performances are flipping extraordinary (as always,) I guarantee that if someone else was playing these parts, I would not be writing about the movie.