This series is not going to take a linear path, because sometimes filmmaking is not learned in this way. Sometimes we have to sprint before we can crawl. Solid framing and composition will enable filmmakers of all levels to sprint.

This is one of the most important aspects of filmmaking, the composition and framing of what we see on the screen. In the beginning, filmmakers often ignore this important element of camera control and point the camera at anything, in any direction.

Additionally, many are inclined to center their subjects in the frame, but unless we're talking about Wes Anderson, that is rarely how a movie is shot.

There are always exceptions to the rule, rules are made to be broken, and framing and composition is ultimately the decision of the filmmaker. However, when starting to shoot films, documentaries, videos for fun, etc., follow the tips in this great video from Lights Film School, and as time goes on, framing and composition will become a natural and automatic part of your filmmaking/shooting process.

This video was shown in class at my film school. It is less than 8 minutes, but practicing and mastering these concepts is a lifelong endeavor. Framing and composition is an invaluable set of knowledge that you'll want to know if you want to be a director, editor, camera operator, director of photography, gaffer, and many many other film-related jobs. Even if you're just a production assistant, I can't hurt to know a little bit about framing and composition.

I also recommend watching this video and watching this video again after you've worked on a couple projects. It will help create a check list of this that you still need to work on or aspects of framing and composition that have been neglected in your work. This video does not discuss the "Rule of Thirds", a very important aspect of framing and composition, but we will get into that at a later date. Or you can read about it at CraveOnline's Free Film School. 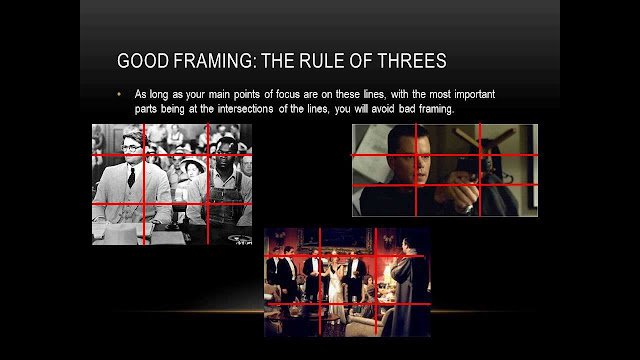 Posted by Burning Empire Media at 5:00 AM