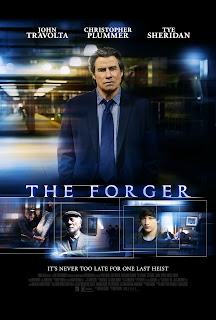 The Forger movie has an 8% on Rotten Tomatoes. I just watched it on Showtime, and it is not that bad. I planned to start the movie and go to bed shortly after, but it at very least, kept me glued to my seat.

Travolta plays a painting forger sentence to several years in prison. Travolta's teenage son in the film has a brain tumor, and Travolta needs to get out of prison to spend time with his son during his final days.  Travolta makes a deal with some shady character, and this guy bribes a judge to get Travolta out of prison early.

Travolta has a couple weak spots, but in general, he's Travolta. I don't understand what everyone's problem is with him these days. The massage therapists? Whatever. None of my business. Allegedly soliciting men does not make a person a bad actor.

That said, I can tell you exactly why this movie has an 8% on Rotten Tomatoes. It is that thing on his chin. I don't understand what is about these lower-buget-weird-facial-hair movies that Travolta does, but it's the weird facial hair that throws the whole damn movie off. 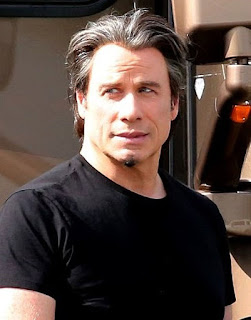 Seriously though, the film had an $11 million budget. No one on this crew had the balls to say, that thing on Travolta's chin has got to go? You see, that thing on his chin is to blame for an 8% on Rotten Tomatoes.

This is easily a 33-45% film, but some asshole in development gets some weird fruitcake idea that edgy Travolta facial hair is a good idea. It is not. Either way, it has happened before, and I'm sure it will happen again.

Now, other sites and critics are not making the same observation, they're making up lies about Travolta's performance and the story to sound intelligent, but honestly it's a halfway decent film. It's simply the thing on Travolta's chin that sucks.