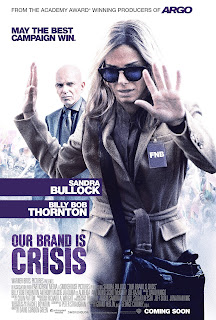 Our Brand is Crisis is a solid political comedy. Sandra and Billy Bob provide solid performances as usual, and the film was more entertaining than I expected.

Personally, I feel as though the ending fell a little flat, and it came off as though the producers were trying too hard to win awards. However, the film contained a positive message, and it was intelligently constructed.

The purple color scheme utilized by the production was refreshing and visually striking. The use of the color provided a unique palate that stands out in a world often saturated by orange and teal.

Ultimately, Our Brand is Crisis investigates the troubling dynamics of global leadership and politics, and it provides the audience an important perspective on political campaigns and the manufacturing of public opinion. Although the film is not as emotionally moving as it seems the producers intended, it is certainly worth watching.
Posted by Burning Empire Media at 10:00 AM