Magic Mike XXL may be the only time that I have ever shouted, "That was the worst movie ever" once the credits rolled. (Some ladies in the crowd were upset by my boisterous statement.) 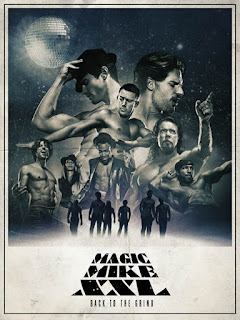 The ending was awful and nothing really happened. It was also the most awkward theater going experience I've ever had. I went with my mother and sister for my sister's birthday.

Meanwhile, the worst performance in the film was Jada Pinkett. The dudes did pretty well, but Jada was downright irritating. Although it may be one of the worst movies of all time, I still recommend seeing Magic Mike XXL.

There were some cool aspects of the movie, and it had heart when you'd least expect it. Honestly, some of the scenes were incredibly hilarious. If nothing else, Magic Mike 2 was fun.
Posted by Burning Empire Media at 12:00 PM