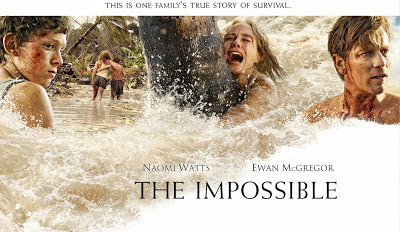 I am a huge fan of The Texas Chainsaw Massacre. While the historical horror slasher has nothing to do with The Impossible, I feel that it is very important to point out the level of intensity I can normally stomach. About fifteen to twenty minutes into The Impossible, I found myself think that I no longer wanted to watch the film.

The thought did not cross my mind because I thought the film was going to be bad, but rather it was almost too much for me to handle. It was simply too much, too real, too much of a setup for sadness. Additionally, upon initially learning about The Impossible I thought that it may simply be a film studio attempt at a cheap buck. However, as it tuns out, I ultimately found The Impossible to be an awe-inspiring and gut-wrenching tale based on actual events and people. I do not know if I have ever cried as much during any other film, ever. (Maybe I was just in a mood though.)

Naomi Watts made a brilliant performance. Although, I have yet to see all of the nominees performances if Watts does not win an Oscar I'm going to slap someone. Even the children stars were not overly annoying, and demonstrated true talent and tenacity. I am more than happy that I was able to man-up and get through till the end. The movie was certainly better than I expected, and is a must-see for any parents out there.