My, what a pleasant surprise Seeking a Friend for the End of the World turned out to be. I was looking forward to the release of the film, but it seemed as though it quickly came and faded into the night with a gentle whisper. It would appear that this turnstile type theater visit would be the fault of shabby marketing, or maybe I am simply alone in my applauding sentiment. However, I found the picture to be one of the most adorable and sweet love stories that I have seen in awhile. And I generally do not have a taste, or the patience and tolerance, for adorable and sweet. 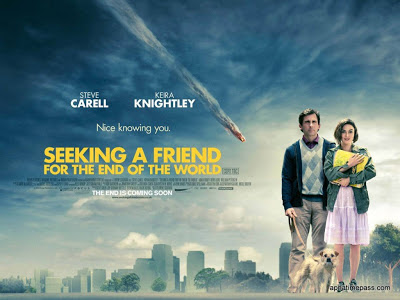 While its proper category rests in the romantic-comedy slot,  much like 40-Year-Old Virgin, the cringe the genre generally arouses should not stifle the perception of the movie's level of quality. I originally thought that I would find the concept of Seeking a Friend more interesting that the film itself, yet I am shocked at how much I appreciate this type of storyline in action.

Furthermore, all of the performances were not over the top nor too dry, but rather just right and on point. Even Keira Knightley managed to pull off a believable and entertaining modern-day-British Winona Ryder quite nicely. The concept of the movie alone seemed as though my expectations would automatically be set too high. Whether or not they were, Seeking a Friend for the End of the World exceeded my expectations. Although, I would not call it a non-stop-laugh riot, it did not need to be, and I am pretty sure that was not the ultimate goal of the film's makers. Meanwhile, there were plenty of hilarious moments, and Seeking a Friend for the End of the World provides an uplifting tale of the human spirit even as the world ends.