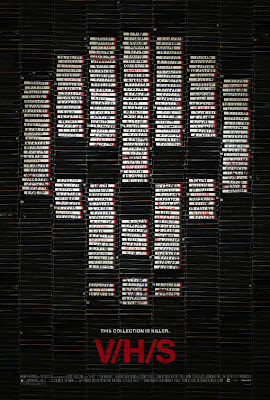 Found-footage-horror films seem to be quickly growing into an unstoppable sungenre of horror. While I love the horror movie genre, I find it to be filled primarily with large amounts of steaming manure. My feelings about camcorder-horror generally do not differ much.

My desensitized sensibilities find a person’s fear of red curtains and floating sheets quite laughable.


Fake blood is fake blood to me. I get the willies much more so from random people with bad teeth at the bus stop than movies meant to terrify an audience; until now.

Before I move forward I must explain that in order to preserve the sanctity of creepy fear this film causes me there is quite a bit that inherently must be left out. In other words, there will be no spoilers in this review, and there is nothing I can say here to capture the jaw dropping and wide eyed moments of “What the hell!?” found within the chapters of V/H/S.

V/H/S strings together several short sequences of terror via VHS tapes shot by camcorder POV cinematography. At first, V/H/S feels like any other found-footage-horror movie out there. However, the commonplace atmosphere quickly fades and fear floors the screen.

Each sequence of V/H/S screams, “Kiss my ass Blair Witch,” and in less than two hours V/H/S contains anything a fan of horror could possibly desire. Excessive and brutal gore in some moments, and cut away macabre that only the grotesque imagination of the viewer can fill in others. Maddening betrayal, sickening perversion, supernatural disgust, and shocking cinematic twists of dread are merely a few of the ingredients of V/H/S.

Warning! UTDF does not recommend this film to persons with the following conditions: seizures, migraines, heart conditions or abnormal blood pressure, IBS, bed wetting, schizophrenic episodes, general sissyness, under the influence of psychedelics, expectant mothers, or any other conditions that may be irritated by a truly terrifying cinematic experience.

That said, just toughen up. UTDF challenges anyone to watch this film without wetting their pants. Those that do are stronger than our entire staff. V/H/S has found itself at the top of  UTDF's list of horror movie recommendations for 2012.