This is an assignment that I had to do for school, but I decided that it is also quite suiting for Up Till Dawn Films' purposes. The direction of the review is based upon the rubric of the assignment. 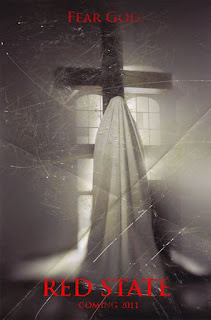 An individual’s freedom to choose religious beliefs is a basic human right. Unfortunately, many times in society religious beliefs are used to justify extremely violent and deadly actions. Kevin Smith’s film Red State, starring Michael Parks and John Goodman, tells a story about a Christian fundamentalist group. The group uses their religious beliefs to rationalize violent and deadly actions inflicted upon those they categorize as “sinners.” The highly controversial film is a cinematic masterpiece that redefines Smith as a filmmaker. Kevin Smith is perhaps best known for his flatulence focused comedy films, passion for comic books, and network of podcasts. Red State came as a surprise to his most loyal of fans and the film industry in general. Written, directed, edited, and self-distributed Red State proves that Smith is not just a jokesmith satisfied with making audiences laugh.  The film demands that Smith be regarded as a sophisticated and multidimensional filmmaker. Smith accomplishes this sophistication by tackling the social issues and themes within Red State. Labeled as a horror film Red State is a shocking social commentary on religious intolerance and the violent consequences of extreme belief. Red State is a picture of society that shows the lines of terrorism are drawn by belief and action, not race and cultural background.

The film also shows that while society has made significant progress, intolerance of race, religion, and sexual preference are still a serious reality. Red State’s main character Pastor Abin Cooper (played by Michael Parks) is especially intolerant of homosexuality. Cooper is a charismatic religious leader that uses his own religious interpretations and beliefs to fuel an anti-homosexual agenda. He passionately indoctrinates his beliefs onto the members of his congregation and motivates and mobilizes violent and murderous action. The intolerance of Cooper’s congregation is seen throughout the world. Red State reminds the viewer that the boundaries of homicidal intolerance are not set by religious, geographical, or racial difference. The intolerant only lack prejudice upon the selection of their victims. The intolerance of Cooper’s congregation is captured with a unique style of cinematography and powerful acting performances. Red State is presented in the clarity of high definition film photography. However, the film uses a grindhouse tone that captivates the eye of the audience and properly captures the gritty, dark, and violent nature for which the film is set. This unique style and powerful acting performances are what make Red State downright creepy. Michael Parks’ academy award worthy performance is essential to Red State. Early in the film an intense 10 minute long sermon is delivered by Cooper. The scene is scary and powerful. There is no doubt or confusion in the audience’s mind that Cooper can use charisma, manipulation, intensity, and belief to mobilize his congregation.

Consequently, Cooper’s violent mobilization of belief is the fuel of terrorism. Cooper’s congregation is not a simple church group; it is a terrorist organization. Smith uses the character of A.T.F. Agent Joseph Keenan (played by John Goodman) to facilitate the role of government and a deeper view into the nature of terrorism. The fictional government’s policies regarding terrorism are no different that the policies of real-life society and as Keenan’s peer Agent Hammond states, “If you kill an American because of a religious belief you are a terrorist.” Smith further mirrors society when the Keenan’s superiors make the decision that Cooper’s congregation needs to be eliminated by any means necessary.  A barrage of bullets and death is traded between Cooper’s congregation and the A.T.F. The film takes on an almost action flick way of editing and sequencing scenes, but the violent and explicit deaths are not a glorification. When a young lady accidentally kills her mother it is clear that Smith wants the world to know that guns are not toys. Many times the doctrines and religious texts, meant as a guide, are taken literally. Red State captures the deadly ramification of when these misconceptions are acted upon.
In conclusion, if Kevin Smith had something to prove, whether as a filmmaker or a commentator of political and religious ideology, Red State proves it. The film shows that intolerance and belief have the potential to be extremely dangerous and violent states of mind often mobilized into bloody terroristic action. It is the sense of realism that Smith uses to execute the film that makes Red State truly horrific. While the organizations and individuals of Red State are fictitious, Smith provides a mirrored view of the terrifying similarities found throughout our own society.

I use the term "multidimensional" too much. 4.7 Stars.
Posted by Burning Empire Media at 2:10 AM