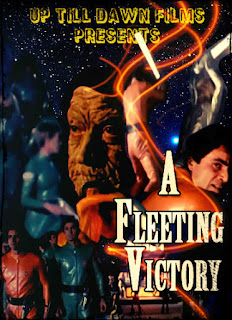 Burning Empire Media is proud to announce the Up Till Dawn Films: 2-Minute Crappy Film Series! A brand new style of remix film art that is sure to please. We all know the feeling when two minutes into a film we already ask ourselves, "What am I doing here? Why is this happening? I need to leave this place right now."

Our first film, A Fleeting Victory, is a remix tale of the classic War of the Robots. The film is essentially a bunch of people dressed up like Steve Zissou and fighting robots with lightsabers.  All while urging the viewer to jump off a bridge. We broke it down, spruced it up, had The Night Will Steal You redo the score, and chopped a more satisfying conclusion. In a truly irresponsible, zero-budget, for-profit, film house fashion we will release A Fleeting Victory today, tomorrow, or the next day.

Check back soon for the Up Till Dawn Films: 2-Minute Crappy Film Series! Look for the series on DVD in 2013! And buy Burning Empire Media Presents: on DVD now!